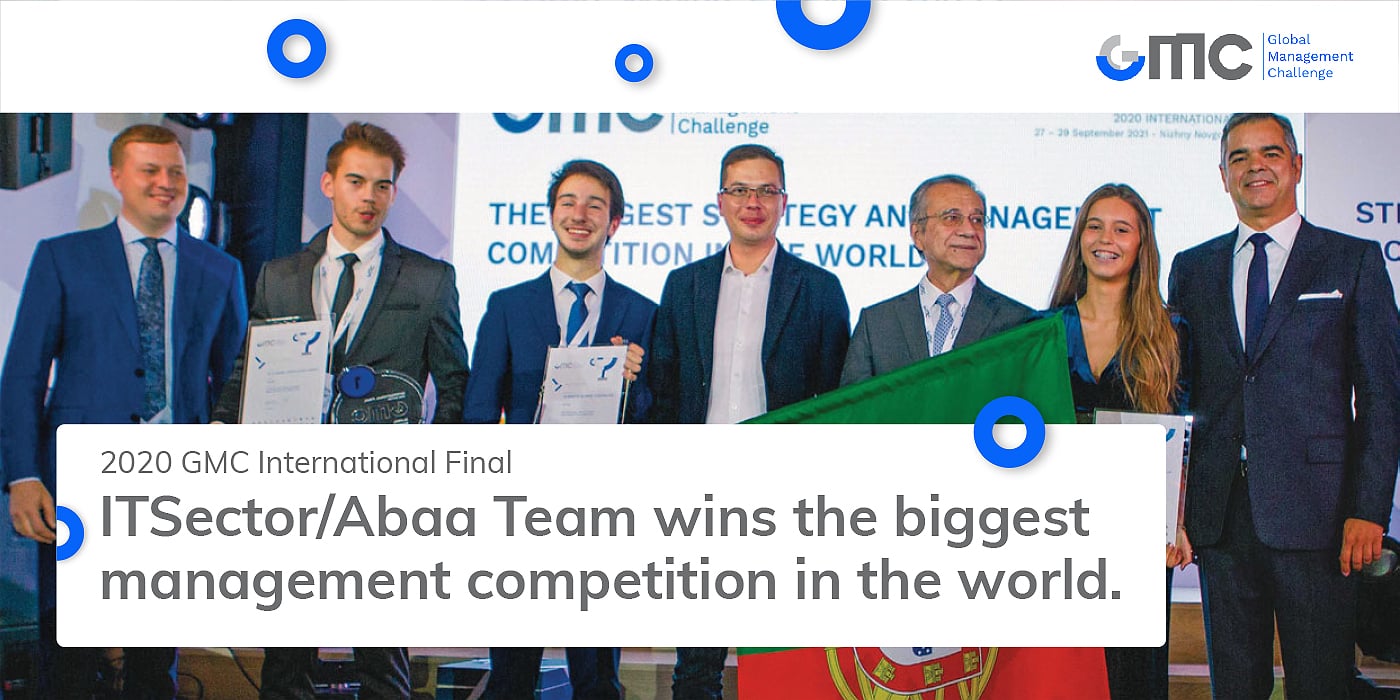 The Portuguese team, formed by three young students, won the international final of the 2020 edition of the Global Management Challenge.

The GMC 2020 Edition International Final was held at the end of September, in the city of Nizhny Novgorod, Russia. This event brings together the national winners from all the participating countries. Teams from 20 countries were competing in Russia (23 were initially planned), 9 of them online and 11 in person. As usual, the international stage of each edition of the competition includes a semi-final where the countries are randomly organized into groups. Angola, Brazil, China, Macau and Tajikistan were in the blue group, Australia, Czech Republic, Mexico and Slovakia in yellow, Estonia, India, Kyrgyzstan, Poland and Russia in green and Belarus, Ecuador, Italy, Panama, Portugal and Spain in red.

After an arduous day of semi-finals, held on September 28, in which each team had to make five decisions on the fate of their company, only two teams from each group, those with the best investment performance, moved on to the final, on the following day. This was how Portugal, one of the countries that passed to this phase, ended up facing India, Spain, Russia, Czech Republic, Slovakia, Macau and China. In the final, the teams once again had to make five decisions and the one with the best results in the investment won.

"We started to hear the results and thought we would be in the top 3. When they said Portugal was the winner, we couldn't believe it," revealed Alexandre Amaro, leader of the Portuguese team, after the announcement of the victory to the SIC/Expresso reporter. As Alexandre Amaro explained at the event, both in the semi-final and in the final they had a startup to manage and what changed from one day to the other was the market environment. The national team relied on marketing strategies, on distribution and sales to grow their business. "It's interesting to see the different strategies in each country, which are very cultural. There are some that are more conservative, others that risk more, and as this is a very competitive environment, we believe that it has further developed our skills and capacity to decide under pressure", said the team leader. Alberto Carvalho, from the Portuguese team, said that this victory "demonstrates our management skills, with an element that is an engineer but that also has very good management skills". For the three young students, the mixture between these two areas was determinant to achieve this result. Beatriz Silva, the third element of the national team, defended at the event that this is a competition that "prepares young people for the job market".

The international final was a learning moment for the Portuguese. They learnt to work even harder under pressure, got to know other cultures and strategies, established relationships with students and executives. A scenario that pushed them "out of their comfort zone", they stated.

Sponsor and Organization proud of the achievements of the Portuguese team

And if for Alexandre Amaro, Beatriz Silva and Alberto Carvalho winning was something they didn't believe in, Jorge Bravo, COO and member of the executive board of IT Sector, the company that supported the participation of this team in the Portuguese edition, victory was a certainty. In a meeting before the team travelled to Russia he stated, "It will win, it can only win." And he got it right. "It was a spectacular victory. In the 2018 edition we had a team in second place and now, in the 2020 edition, we were first", said João Matoso Henriques, CEO of SDG. In his opinion, the result achieved gives even more vigour to the competition in Portugal, as it shows that it is not always the teams from countries like Macau, China or Russia that win. "We will project these winners and take advantage of the Communication that this gives us to motivate other participants, who thus realize that it is possible to win internationally," he added.

Besides the first place won by our country, the team from China obtained the second place and India closed the third place of the podium. The host team came in fifth place in the competition.

About the Global Management Challenge competition:

The Global Management Challenge has been organized for over 40 years by Expresso and SDG. In this competition, each team manages a company, with the aim of obtaining the best investment performance for their company in its market. It had its first edition in 1980 and a year later, in 1981, it began its internationalization. Today there are more than 30 countries where it is present. The GMC 2021 Edition International Final will be held next year in Santiago de Compostela, Spain.

These Terms apply to all visitors, users and others who access or use the Service. By accessing or using the Service you agree and are bound by these Terms. If you disagree with any part of these terms, then you may not access the Service. Links to other websites. Our Service may contain links to third-party websites or services that are not owned or controlled by ITSector. ITSector has no control over, and assumes no responsibility or liability for the content, privacy policies, practices, or services of any third-party websites. You further acknowledge and agree that ITSector shall not be responsible or liable, directly, or indirectly, for any damage or loss caused or alleged to be caused by or in connection with use of or reliance on any such content, goods, or services available on or through any such websites or services. We strongly advise you to read the terms and conditions and privacy policies of any third-party websites or services that you visit.

Changes. We reserve the right, at our sole discretion, to modify or replace these Terms at any time. In the event of a material revision, we will attempt to provide at least 15 days’ notice prior to any new terms taking effect. What constitutes a material change will be determined at our sole discretion. By continuing to access or use our Service after those revisions become effective, you agree to be bound by the revised terms. If you do not agree to the new terms, please stop using the Service.